Thanks to you, I was able to find and fix a couple of annoying issues as well as improve some UI elements. Without much further ado, here's Early Access #2. Just like EA1, it will expire within a week. As always, please provide feedback.

Please do not download EA2 anymore. You can find EA3 here.

In the last couple of months I've been working on switching some things under beaTunes' hood as well as in its user interface. Today, I'm happy to release the first Early Access version of this effort.

So what has changed?

Under the hood, many third party libraries beaTunes depends upon were updated. Probably the biggest step was from Hibernate 3.4 to 4.3. But other libs like Jython, Groovy, and JRuby were updated as well. Additionally, some of the database caching code has been streamlined for greater efficiency.

On the surface, beaTunes 4.5 features a fresh new look—much more in line with Yosemite and the upcoming El Captain. Library, Analysis, Inspection, and Charts are now accessible via a vertical mode button panel, removing some visual clutter. With the same idea in mind, both the sidebar (what used to be the playlist tree) and the status bar can now be hidden via the View menu. Also, the Matching Songs and Album Info buttons are now only visible when the main song table is visible as well. 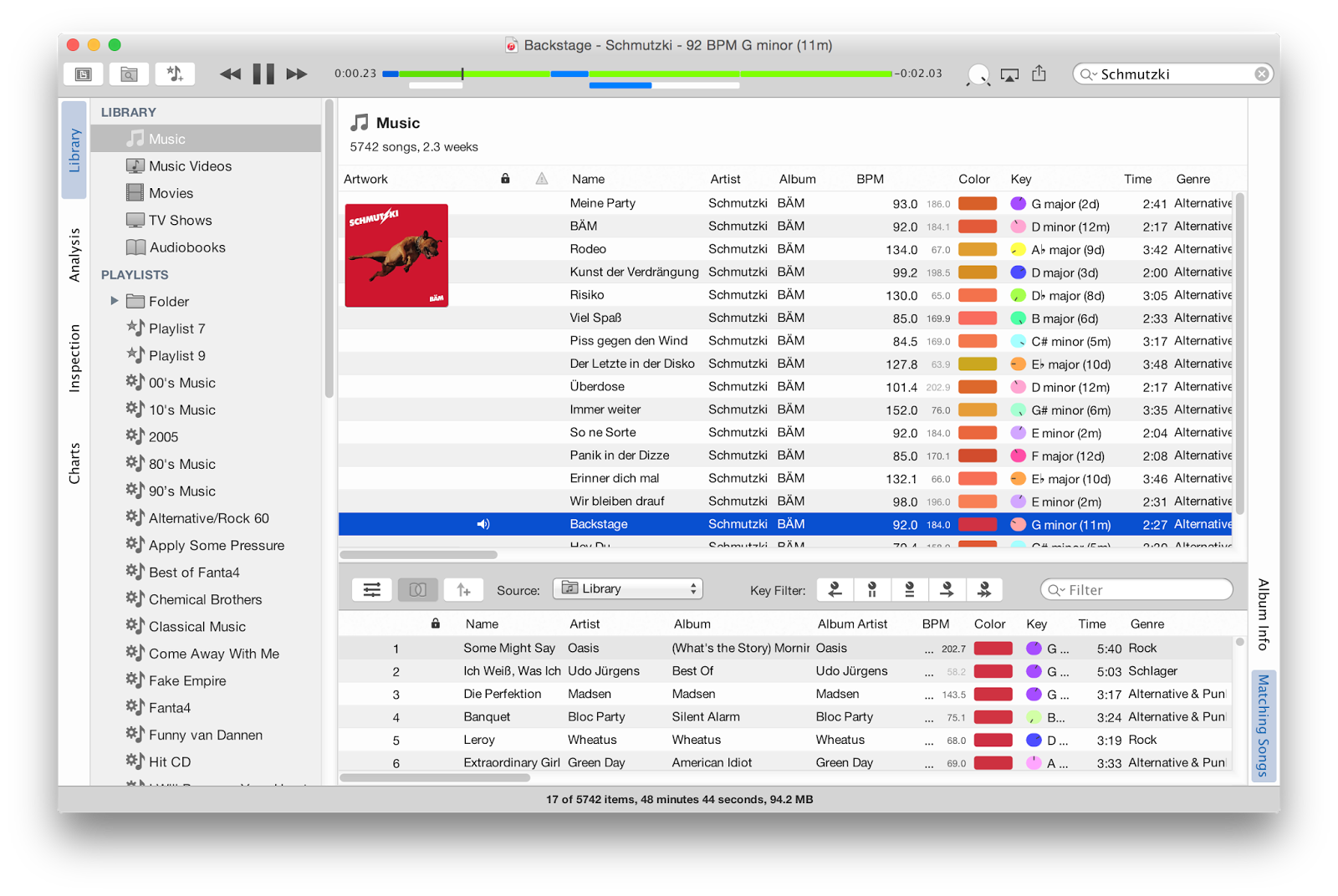 The goal of this update is not to add a lot of new features. However, some of you will be very pleased to see that it has gotten much easier to write computed keys to the comment field (simply check a box in the analysis options). Also, alternatively to valid ID3 TKey values, one can now embed Open Key values as key names (box in the general preferences). Furthermore, there is a new inspector and a bunch of other little improvements. One of them being a dedicated button in the matching songs panel, that allows adding the selected song to the current playlist with a simple click or press of a button (keyboard shortcut), instead of having to drag it.

Because I didn't try to go overboard with new stuff, this Early Access release is close to production quality. However, it still needs some testing. Please download it and try it out. As always with Early Access versions—the software will expire, in this case in a week. If the real thing isn't released by then, I will post another EA release in time.

I'm looking forward to your feedback.

Please do not download EA1 anymore. You can find EA2 here.

iTunes 12.2 delivered a bunch of surprises for all of us. Today's update deals with some more. In case you hadn't noticed, beaTunes suddenly displayed some additional playlists for all kinds of non-AV content (Apps, PDFs, ...). This stems from the fact that Apple apparently re-organized some iTunes internals and started to export these items in iTunes' iTunes Library.xml file. To fix this, I have added some code to filter out these unwanted lists and items. As always, you can download the update from the download section of the website.

The unfortunate Return of DRM 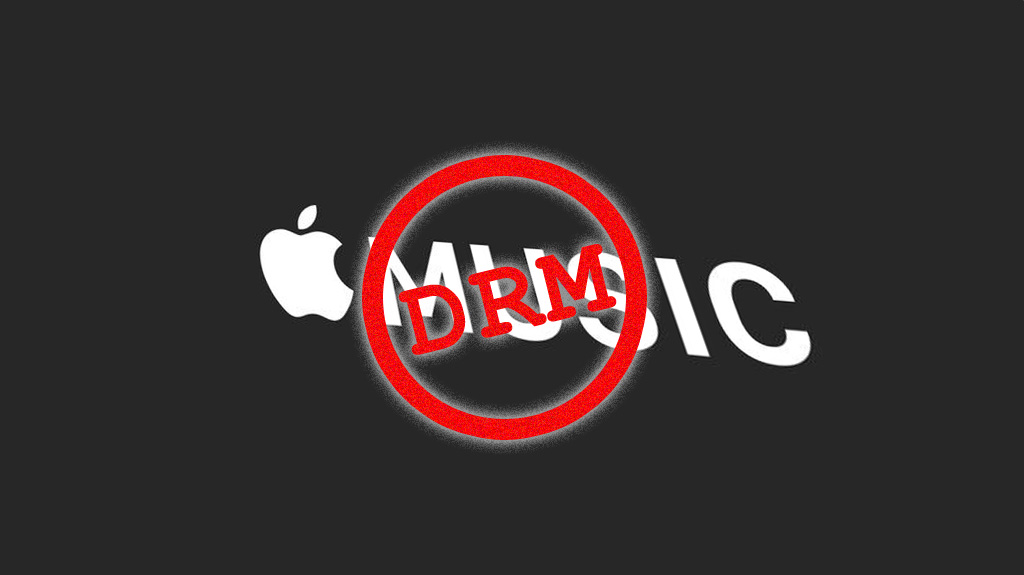 Back in April 2007, we thought it was the beginning of the end. The end of DRM-crippled songs sold through iTunes. Apple announced that songs released by EMI would soon be sold DRM-free in the iTunes store. In May of the same year, iTunes Plus was launched and by January 2009, Apple was finally able to announce that "all four major music labels—Universal Music Group, Sony BMG, Warner Music Group and EMI, along with thousands of independent labels, are now offering their music in iTunes Plus, Apple’s DRM-free format". Undoubtedly, a great achievement.

Fast forward to June 2015. Apple announces Apple Music, as "a revolutionary streaming service and app that puts the entire Apple Music catalog at your fingertips across your favorite devices". As we all know by now, the public reception after the launch has been not quite revolutionary, but rather luke warm. Users reported installation glitches, UX issues and plain old bugs.

One thing that took many users by surprise, was the fact that iTunes Match and Apple Music share some properties, like being able to import your private collection, but are still two different services. Kirk McElhearn, wrote a good explanation of how exactly they differ. And here's the most important part:

How could this happen? And why isn't this all over the news? When you think about the business model, this immediately makes sense. Without DRM, people could simply download the whole Apple catalogue and freely share their files. Given the three months trial period, they could even do this for free. So in a sense, this is very understandable—but unfortunately not obvious.

So what, you might say—I don't see the disadvantage of DRM-crippled music! Until of course, you want to listen to it on a non-Apple device for the first time (the Android version isn't out yet). Or want to use a tool like BeatGauge to determine the BPM. Or decide you want to DJ with Traktor and realize: Traktor can't play protected content. Suddenly DRM becomes a big nuisance and it feels like 2007 all over again.

Naturally, other streaming services aren't necessarily much better. To integrate Spotify into an app, you have to first get approval and then use their special SDK, that does the decoding for you. But at least they offer such an SDK. Plus a REST-API for metadata access. Apple does not even offer an API for iTunes Match, which was introduced almost four years ago.

No doubt, streaming is here to stay. And Apple is most certainly on the right track, trying to meddle in this market. But so far, it has acted amateurishly, delivering a half-baked service. And many users haven't realized, that by choosing streaming, they also chose DRM. Let's hope, Apple finds a way to allow at least third party apps to access the raw audio of Apple Music—just like Spotify did.

Just want to make you aware of a little beaTunes maintenance update. As always, you can download the update from the download section of the website.